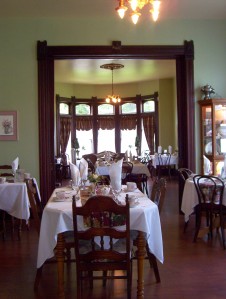 “What made you want to open a tea room?”, is a question we get asked a lot.  I didn’t grow up drinking much tea…my parents are German and Scandinavian Lutherans from North Dakota, so coffee was the only hot beverage in my heritage.  Yah, sure you betcha they put out some tea bags at the church “coffee hour” on Sundays, but I never knew anyone who actually tried it.  Then, in the early 1990’s while on a buying trip for our gift shop, in Atlanta, in July, I discovered iced tea.  It was love at first sip!  So that’s where the “tea” part of our story began.

I must go back a lot further though, to get to the “tea room” part of the story.  As a child (and to this day still) I loved reading the old juvenile series books.  I started with Nancy Drew and The Dana Girls, and then discovered many other series, like The Campfire Girls, Betty Gordon and Ruth Fielding.  In these books, written in the early part of last century, the heroines always stopped in little tea rooms to have lunch while on their adventures.  Usually the tea rooms were quaint little cottages, run by nearly penniless young women who ended up being part of the story.  The food was always simple, but delicious and I wanted to eat in a tea room.  Department stores had restaurants they called tea rooms, but they were so NOT what I visualized.  I grew up in Issaquah, WA and as a teenager, worked in Gilman Village, a quaint shopping area that was comprised of old homes moved onto a nice property and connected by brick paths and gardens.  There was one little place (The Boarding House Restaurant) that would have been a perfect tea room, but it wasn’t called that, so it still didn’t count in my mind.

Then in the mid 1990’s, a new place opened up in downtown Bellevue.  Not on Old Main ( a shopping district with a bit of charm), but in the bottom of a highrise office building.  It was called Lisa’s Tea Treasures, and as soon as I heard about it, I made a reservation.  It was a cute little place, much like I had envisioned (at least once you were inside!) and the food was wonderful.  I experienced my first high tea, and was thrilled.  We would take our friends, families and employees there for any occasion we could dream up.  Then one day, they were gone.

About this time, I heard about another tea room somewhere around Burien.  While not as fancy as Lisa’s, it was still wonderful and I was hooked.  I started a tea journal and began seeking out tea rooms wherever I traveled.  By this time there was this great new tool called The Internet, and it made it much easier to find tea rooms.  I wrote up my first menu for a tea room in 1996, and began giving small tea parties at home.

In the meantime, back at The Secret Garden, we began to carry vintage items.  We’d go to estate sales and thrift shops every chance we could and even took a couple of extensive road trips looking for the china and glassware and other cool stuff that our customers coveted.  In 2000, a trip to Europe, with the women in my family, centered around hitting all the flea markets we could find!  We also rented a car in England so we could go to the Potteries district (Stoke-on-Trent) and tour the china factories.   I had always loved old stuff, but once I started learning about antique tabletop, it nearly became an obsession.  Of course, we took tea at every tea room we came across and added even more ideas to my tea journal. 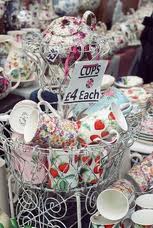 By the time we did our Mother’s Day Tea 2002, I was quite well versed in the subject and it was such fun to go through my journal and compile the best ideas from all the places I’d visited to incorporate into The Secret Garden Tea Room.  I’m so fortunate to be able to combine so many things that I love into an occupation!

One thought on “Why a tea room?”