Usually, when developing a new recipe for the tea room, there’s a whole procedure that I follow:  research, compile, test, re-test and re-test and then make a large batch to see how it works in quantity.

Usually, I am planning at least several weeks out, however occasionally we come up with a winner on the fly.

A couple of weeks ago we needed a savory for our high teas, and I was out of some ingredient for what I had been planning to make.  I knew I’d bought some leeks for potato leek soup that Mark hadn’t used that morning and I spotted a new package of bacon in the fridge.  Hmmm, what could I do with bacon and leeks.  I decided that a creamy goat cheese mixture plopped into phyllo tart shells might just work.  They turned out delicious and so I thought I’d share.
Printable, full recipe below.

I began by chopping the bacon into small pieces and then cooking it over medium heat. 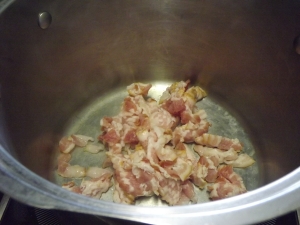 While the bacon was cooking I sliced the leeks crosswise about 1/8th inch thick from the white end up to where the dark green tops begin.

After chopping the leeks, I did a quick swish in the salad spinner with lots of cold water to get any of the gritty mud that they’re grown in.  A quick shake to remove most of the water and they were ready for the pan just as soon as the bacon had rendered enough fat that the leeks wouldn’t stick to the bottom of the pot.

After adding the leeks to the bacon, I stirred occasionally until the leeks were limp and just beginning to turn light golden in a few places.  While they were cooking, I cut the cream and goat cheeses into 1 inch cubes so they would melt faster.  Once the leeks were melted down, I added the cheeses and turned off the heat.

I stirred this mixture until the cheese was incorporated and then added some regular black pepper.  I gave it a taste and decided that it didn’t need any salt, but I suggest you give it a taste and see what you think;  some brands of bacon are saltier than others.  Do not eat all of it while you’re trying to decide if you need salt.

At this point, you can let the mixture cool and then store in the fridge for a few days until it’s needed, or you can go ahead and make the tarts.

I used a scoop that is a scant tablespoon (#70 for those who are scoop users), and just dropped it into the tart shells.  I sprinkled mine with a bit of minced parsley for color, but I think a miniature sprig of thyme would be very nice too.

I baked mine in a convection oven at 350 for about 8 minutes until the cheese was just turning golden brown, but in a regular oven it might be a bit longer.  Taste and enjoy!

Saute the bacon over medium heat.  Add the leeks once the bacon has rendered enough fat to cover the bottom of the pan.  Stir occasionally until the leeks are limp and just starting to color.  Add the cheeses and turn off the heat.  Stir until there are no white cheese chunks left, then add the pepper and salt if needed.  Refrigerate in an airtight container up to 3 days, or use immediately.

Assemble Tarts
Scoop 1 scant tablespoon into phyllo shells and top with a bit of parsley or sprig of thyme.  Bake at 350 for about 8 minutes until cheese just turns golden brown on the peaks.  Serve immediately or within an hour at room temperature.

Note
This recipe makes about 3 cups of filling, so it will do about 48 tarts.  They come 15 to a box, so this works out okay.  If you don’t need that many, try the filling in an omelet, or cold on crackers as a spread.  It would also be wonderful in puff pastry.  I’m sure you’ll find a way to use it all, even if it’s just on a spoon!